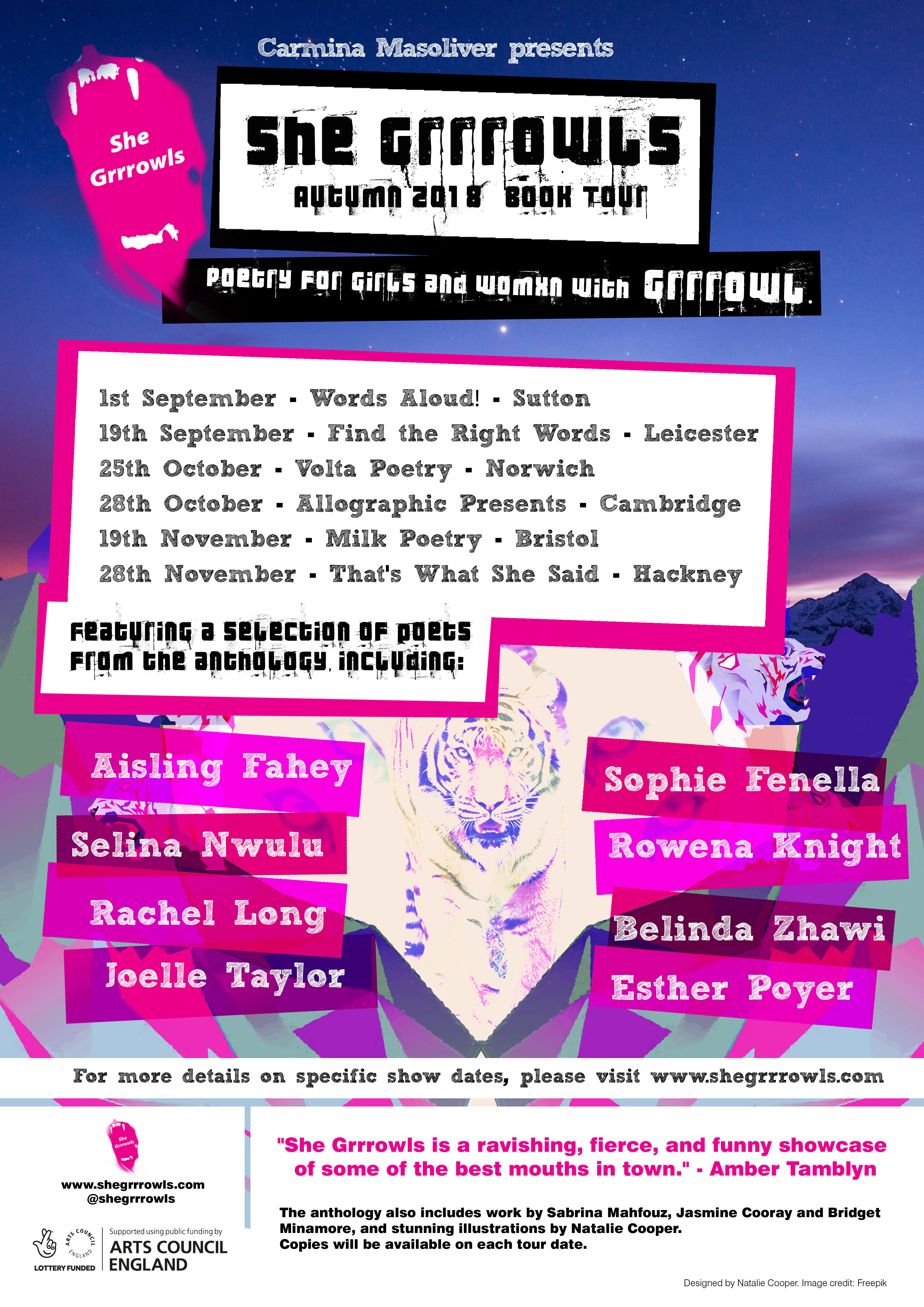 This design incorporates elements of the book cover, designed by Matthew Dickerson.

It starts with a growl – sometimes soft, sometimes loud – and a feeling of coming together to share in the experiences of womxnhood in its various forms. She Grrrowls is a place to feel empowered and energised, whether in the pages of the book, or as the words come alive on stage.

She Grrrowls gives voice to the experience of different womxn as they read newly commissioned work published in She Grrrowls: The Anthology (Burning Eye Books) alongside existing work. Exploring topics such as what it means to be a ‘good woman’, how sexual violence is interlaced with childhood nostalgia, and the importance of sisterhood and relationships that make us stronger, be prepared to laugh, cry, and sometimes squirm.

Hear a selection of these powerful voices as part of the She Grrrowls Autumn 2018 Book Tour, and discover more within the pages of the book, featuring ten beautiful illustrations. Through this emotional journey of poems that pack punches, you will come out the other side feeling ready for whatever the world throws at you.

Edited by Carmina Masoliver, and published by Burning Eye Books in 2017, thanks to funding from Arts Council England, we are celebrating the publication across six different dates.

Aisling Fahey is a poet who has performed in various locations across England, Ireland, America and India,  including the Barbican, the Houses of Parliament and Glastonbury. She previously won the London Teenage Senior Slam and SLAMbassadors UK, run in association with The Poetry Society. She was a member of Barbican Young Poets and is part of the Burn After Reading collective, established by Jacob Sam-La Rose and Jasmine Cooray. Aisling was Young Poet Laureate for London 2014 – 2015. During her tenure, she completed residencies in places such as the Free Word Centre, the London Irish Centre, Waterstones Piccadilly, the Queen Elizabeth Olympic Park and her old primary school in Walthamstow. Her year ended with a tour of India organised by the British Council where she performed and led workshops across India. She has appeared on Front Row, BBC Radio 4, The Robert Elms show on BBC London and ITV London Tonight. She graduated from the University of Exeter with a degree in English Literature in 2014. www.aislingfahey.com

Selina Nwulu is a writer, poet and essayist based in London. She was Young Poet Laureate for London 2015-6, a prestigious award that recognizes talent and potential in the capital. She writes for a number of outlets such as the Guardian, New Humanist and Red Pepper and has toured her work nationally and internationally. She has also been featured in Vogue, ES Magazine, i-D and Blavity amongst others. Her first chapbook collection, The Secrets I Let Slip was published by Burning Eye Books and is a Poetry Book Society (PBS) recommendation. She was recently ‘Writer and Creator in Residence’ at the Free Word centre and Wellcome Trust, looking creatively at food and how it connects to our health and matters of social justice. www.selinanwulu.com @SelinaNwulu

Rachel Long is a poet and the founder of Octavia – Poetry Collective for Womxn of Colour, which is housed at Southbank Centre, London.. Since 2015, the collective have come together to read beyond the canon and write ourselves free. They meet monthly at Southbank Centre, London, and regard it as their poetic home. Octavia have featured on BBC World Service, in The Guardian, ASOS, and Hotdog Magazine. Rachel was shortlisted for Young Poet for Laureate for London in 2014 and awarded a Jerwood/Arvon Foundation mentorship in 2015. She is Assistant Tutor to Jacob Sam La-Rose on the Barbican Young Poets programme 2015-present. www.writesrachell.com @rachelnalong

Joelle Taylor is an award-winning poet, playwright and author who is currently touring Europe, Australia and South East Asia with her latest collection Songs My Enemy Taught Me. She is the author of 3 full collections and is currently completing her debut book of short stories The Night Alphabet, with support from the Arts Council. She has featured on The Verb (R3), Power Lines (R4), Educating the East End (ITV), and We Belong Here (BBC). She founded SLAMbassadors, the UK’s national youth slam championships, for the Poetry Society in 2001 and remains it Artistic Director. SLAMbassadors is the longest running spoken word education programme in Europe, and is Home Office recommended arts practice for hard to reach young adults. Her work is taught as part of the OCR GCSE syllabus, and she has received a Change Maker Award from the Southbank Centre in recognition of the effect SLAMbassadors and youth slam poetry in general has had on British culture. She is the host and co-curator of premier London poetry and music club Out-Spoken, and a Fellow of the RSA. www.joelletaylor.co.uk @JTaylorTrash

Poet and storyteller from London, she often writes about Caribbean immigration and an imagined past from a rich Guyanese legacy, alongside the imagery and language of Black British Women. She has performed poetry and live literature in the UK and as far flung as Nairobi, Kenya and she has been writer in residence for the London Design Festival at the Victoria and Albert Museum where she has also facilitated art installation seminars. www.estherpoyer.com/writing @estherpoyer

Sophie Fenella writes and performs poetry  in theatres, festivals,  smoky bars and the odd park or back alley, in both the UK and Germany.  Her journey in poetry began with The Roundhouse Poetry Collective, the Burn After Reading Collective and the invaluable opportunity of being long-listed to be London’s Young Poet Laureate in 2013. Since then, She has performed at lots of festivals and been published in many different magazines and anthologies. Most recently, she won the Live Canon Poetry Prize (2017). www.sophie-fenella.squarespace.com @sophiefenella

Rowena Knight was born in 1988 in Palmerston North, New Zealand, but moved to England on her thirteenth birthday. She is a graduate of Durham University, where she founded the Poetry Society. Her poetry was Commended in the Foyle Young Poets of the Year Award in 2006, has been twice longlisted in the Mslexia Poetry Competition, and was shortlisted for the Jane Martin Poetry Prize in 2015. Her work has appeared in many magazines and journals, including Magma, Cadaverine Magazine, The Rialto and Cake. Her first pamphlet, All the Footprints I Left Were Red, was published by Valley Press in July 2016. @purple_feminist

Belinda Zhawi is a Zimbabwean born writer and educator who’s work explores themes of “sexuality, displacement, gender roles and intersectionality.”  She’s co-founder and host of the bi-monthly poetry social BORN::FREE. Zhawi was the 2016/17 Institute of Contemporary Arts Associate Poet  and is currently based in London, working on her debut pamphlet. www.mamoyobornfree.tumblr.com @mamoyobornfree