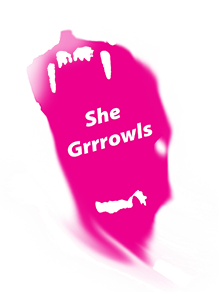 She Grrrowls is a feminist arts night that features poetry, comedy, music and everything in between.

The event grew from a Feminist group after Carmina Masoliver, the creator, left university – where she was a founding member of UEA’s Feminist Discussion Group and Society. Back in London, Carmina missed the group and wanted to take an active role in positive change. As a poet, writer and performer, this seemed the obvious way forward. Thus, She Grrrowls was born.

She Grrrowls believes that the definition of being a woman is decided by the individual. We are inclusive of transgender women, as well as those who are genderqueer, non-binary etc. She Grrrowls believes in a Feminism that is intersectional and strives to be open to all women, of any race, class, sexuality etc. She Grrrowls does not (always) exclude men but invites them to celebrate those who are showcased and participate in the open mic’ in a way that is respectful to the space.

The event focuses on poetry and spoken word and that’s what tends to appear in the open mic’ section. As there is not necessarily one view of Feminism, there may be instances where people disagree with what’s being said. However, we expect audience members not to participate in sexism, homophobia, transphobia, racism, ableism, classism etc. Basically, no “kicking down” on historically oppressed groups of people. We also ask you to avoid cultural appropriation, and try to engage with what this could mean if you are unfamiliar with it. If any audience member ever feels unhappy, uncomfortable, or upset by anything, please feel free to speak to Carmina about this.

Past team members of She Grrrowls include Christina Lappia, Rowena Knight (poet), and Julia Watson (comedian). A lot goes into running an event, and although a lone wolf, Carmina is always happy to have more people on board who share the same vision and would like to help with the running of the event and its promotion. Whilst ad-hoc help is appreciated, having a reliable team is the best, particularly with photography, filming, and podcasting plans. The current events team consists of Carmina, and Ibizo Lami.

Since its birth in 2013, She Grrrowls has been at various venues in London, featured at Goldsmith University’s The Place for Poetry, at Women of the World in Southbank, Attic Arts Club and Leamington Spa Poetry Festival. In 2019, She Grrrowls features at Edinburgh Fringe Festival with PBH Free Fringe for the third time. The She Grrrowls anthology of ten of our poets was published by Burning Eye Books in 2017, and this toured England with thanks to Arts Council Lottery Funding in 2018 The book is listed in the top 100 books of 2017 by The Poetry School.